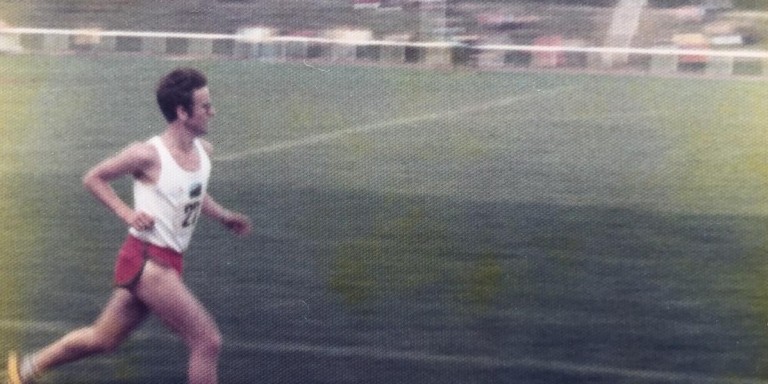 Investigo staff, along with friends, family and professional networks, will be taking part in The Big Investigo Run on Friday 23rd April, in support of our charity partner St Mungo’s. Keen to pick up some useful running tips, Public Sector Director Michael Thornton spoke to his dad, Dave, an experienced runner whose athletics highlights include a charity relay from John o’Groats to London, completing the Frankfurt Marathon in two hours forty-five, and looking after Steve Ovett’s tracksuit! It turns out a lot of Dave’s running lessons are just as applicable to life in recruitment.

How did you get into running?

I joined the armed forces as an 18-year-old and played football initially. I was football mad but I started thinking about taking part in an individual sport where if you don’t do well, it’s down to you. I didn’t have to rely on others, I could win or lose on my own.

I took up running in about 1975 in Germany when I was 21 years old, representing a regimental cross country team. I remember we came over to Aldershot for the army cross country finals in ‘75 and I popped down to London with a corporal I knew for a night out before the race on the following afternoon. I rolled back in at 3am on the day of the race and came nowhere! That was my introduction to running. At the time I thought I’d done a lot of training and was ready, but I quickly realised, compared to the others, I had done nothing.

What’s your favourite place to race?

Germany, on the hills. Specifically Viersen, near Monchengladbach. I lived in Dusseldorf and it was easy getting over there. I always ran better on the hills, mostly running cross country.

Tell us about the time you went running with Steve Ovett.

My friend Mark was a friend of Ovett’s. In 1984 we went down to Koblenz and I wasn’t running as I’d picked up an injury, but my friend was. He said Steve Ovett had turned up and wanted to join the race for a bit, as he wanted to do a bit of training [at this time Steve Ovett was one of the best runners in the world]. Steve asked me if I could hold his tracksuit and meet him at the 10km mark (of a 25km race) to hand it over to him. When I got there, Ovett ran straight past me and said, “Can you meet me at 15km? I’m going to carry on a bit longer.” Same thing happened at 15km. My friend won the race, and Steve ended up doing the complete 25km while I held his tracksuit.

What are your top tips for beginners who might be training towards a big run?

When you’re starting up, take it easy. Don’t do too much too early or you’ll end up with shin splints. Don’t worry about times, just get the miles in. The trouble is now everyone’s going out with devices, going online, Strava, sprinting the last 100 to go quicker. It doesn’t matter. Check it every two weeks rather than every time you go out, and you will see an improvement. Just focus on getting miles in your legs, slowly increase over the weeks.

Everyone will be different, it depends if they’ve done much before. You can only go out and keep going at it. Just don’t get injured.

What about for the more experienced runners?

Training’s changed. In the ‘80s, it was about mileage. Now, it’s about quality. The only trouble is it can lead on to injury if you don’t look after yourself, so make sure you get the amount of rest you need. You can find excellent free training plans online or in Runner’s World, which can help you break out of the cycle of the same old runs, the same old routes…not really pushing yourself.

How do you take the step up to better times?

You’ve got to do faster work. Once you’ve got that base level under your belt, your body and legs can cope. You can then go out and do a quality session of, say, six sets of 400 metres hard. Jog five minutes and get warmed up, then bang in a two-minute spell at three-quarter pace, ease off again to another five minutes of jogging and then throw in another two-minute spell.

If you’ve not got Strava, you can use lampposts to help pace yourself. You don’t have to go flat out – just go faster than normal so you’re working and you know you couldn’t keep it up for long, then ease off and get your breath back. Then the next day, go on a normal run. It helps even if you’re doing it twice a week.

It was about 600 miles from John o’Groats to London in ‘81, which was a charity event for Royal Marsden cancer hospital. There were about ten of us. We ran twice a day, like a relay – one five-mile stint in the morning and one in the afternoon. We spent most of the time playing cards in the back of a Land Rover whilst someone else ran. They’d dump you out on a stretch of road and drive off and you wouldn’t see them until the five-mile point, when they might jokingly drive off when you got there!

How important is it to pay attention to where you’re going?

When I was running the High Wycombe cross country in ’81, I didn’t pay attention to the briefings before the race [which explain the directions of an unmarked race]. I thought, “I’ll never be leading it,” so I was relaxed. Then suddenly at the last minute, I was put on the first leg by our relay team captain. The gun went, I set off fast and found myself leading by quite a lot. There was a fork in the grass with no marking, and I didn’t know where to go. I saw a guy 100 metres behind and shouted to him “which way!?” but obviously I got no answer until he passed me! But I caught him up and came in first that day.

Another time I set off from Mill Hill for an eight-mile run one evening when it was quite foggy. I managed to turn the wrong way and found myself going eight miles up the wrong way of the A1, seeing signs for Luton! Time went by and my wife was getting worried. I ended up doing 16 miles instead of the normal eight!

How can running help you extend your network?

What was your fastest 5km?

16.01 – that was when I was at the top of my running and it was timed on a track. Although I think I went faster during a road race once, but I can’t remember the splits. I was doing about 90 miles a week training. I was training wherever I could – during my lunch break, to and from work. If we were driving as a family somewhere, we’d stop 20 miles from our destination, I’d jump out, put my trainers on and run the distance while my wife drove the kids. I managed to find a good balance of squeezing the training in. The great thing about running is you don’t need a lot of equipment like you do with cycling.

St Mungo’s is a charity which aims to end homelessness and change lives. Find out more about their fantastic work. If you’d like to know more about what it’s like working at Investigo, please contact us.